Musical Tables for a Perfect Fit

When we moved into this house, I just put the furntiure wherever it would fit.
Notice I said 'where it fit', not 'where it worked'.
Well, we've been here a few months now, getting settled in and used to the layout.
One thing that has always bothered both of us is how big the table is in the kitchen nook.
It's never been right for that space, but we needed something there, so I parked it where it fit.
I had to put it right next to the window because there wasn't room enough to put a chair on the backside, so I ended up with a table that had only 3 chairs. I won't mention how off the light fixture is! 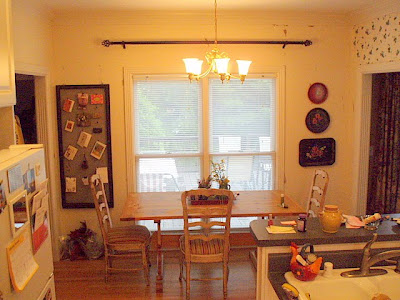 (Please don't pay any attention to that partially stripped wallpaper. It's slowly but surely making it's way out of the kitchen. And yes, I have junk laying everywhere at the moment -disregard that too. I have a plan, really I do.) 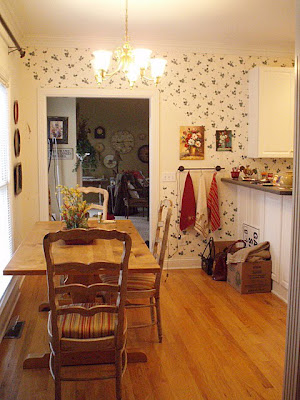 The nook happens to be right in the middle of the walkway between our bedroom, the laundry room, and the living room. I can't tell you how many times I've wanted to pull out my jigsaw and make that table smaller!
I kept telling hubby that we needed a round table small enough to put all the chairs around, that we could center under the light.
So one day I realized that I didn't really like the coffee table I had to use here either. 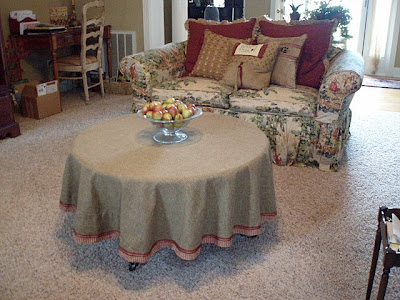 The coffee table I really like is still sitting in the garage waiting for a larger top.
I decided to go on a mission to convert my coffee table top to a kitchen table. It was the perfect size, so why not?
I headed off to my favorite new thrift shop (which I'll tell you about later this week), sure I would find a base for the table. When we pulled up, guess what I saw sitting outside? 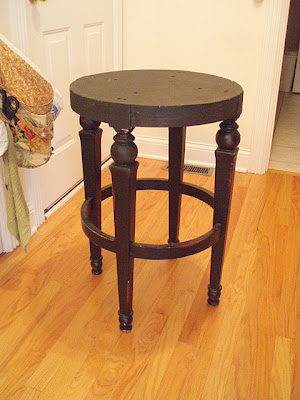 Woohoo! I knew it would work perfect, and for only $8 (that's right!), I took it home.
The gals at this thrift shop paint everything that comes throguh the door, so I double scored since they had already painted in black and distressed it.
In it's previous life, it had been a leather top bar stool. They had just removed the leather that morning and sat it outside. No doubt, they knew I was coming. :)
As soon as I got home, I proceeded to take the coffee table off it's base. 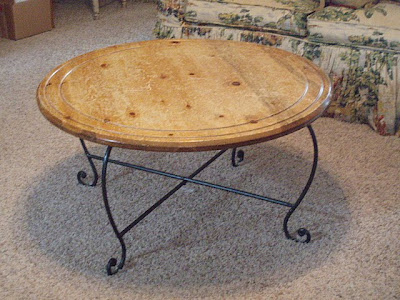 Easy Peasy - removed 4 screws and it was done. 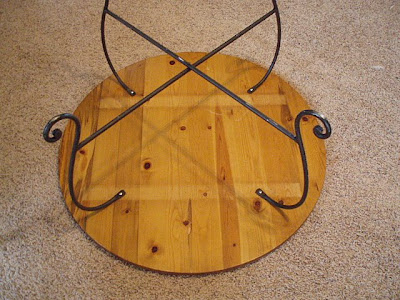 Finally, I put the new base on it. I used 8 screws for that for extra assurance.
And now I have the table I want for the nook. 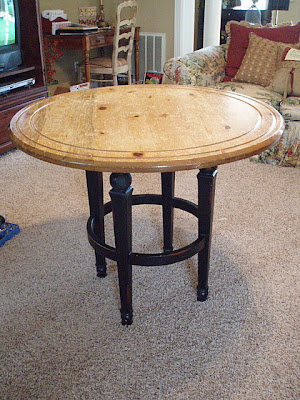 Eventually I'll be painting and stenciling it, but for now, I'm just going to cover it up. 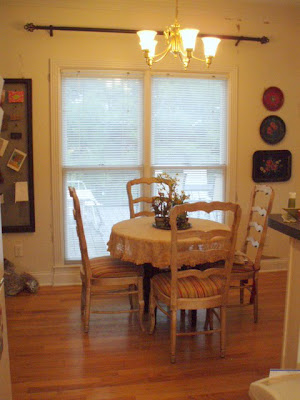 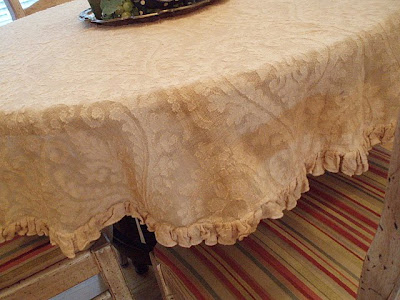 This fits so much better, and even more impotantly, we both like it.
As you can see, this is a room in progress and I'm hoping to do a full reveal of the kitchen in 2 weeks, provided I find the time to make the window treatments and paint it.
I just kinda go with the flow as far as time is concerned. We rarely have anyone over, so it's me and hubby that have to deal with the disarray, and well, he doesn't say a word about it.
I'm sure he knows better. :)